“Westernization” only enhances the aesthetic aspect of ikebana while at its origin, although this aesthetic aspect was important, the understanding of its symbolic content was a basic part of it. 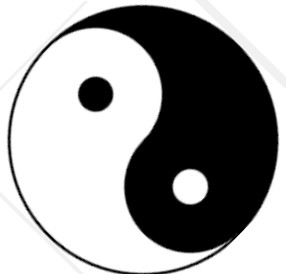 Taoism classifies reality according to a binary system in which the opposing forces yang and yin are complementary and interdependent. Each of them contains the germ of the other, and they are constantly changing. This is characterised by phases of yang expansion, and yin contraction, followed by phases of yin expansion, with a concomitant yang contraction. This system is represented by the symbol of Taiji (or Taijitu).

This Taoist symbol can be found in ikebana since its first codified form – the Tatebana – and is even more evident in Rikka arrangements, which represents the Mount Sumeru (also Meru) with its yang side in the sun and its yin side in the shade.  See art. 22

The Rikka, very complicated to perform, during the first half of the Edo period was simplified into the Seika/Shoka, leaving only three main elements, elements that we find unchanged in the Moribana and Heika styles of the Ohara School.

In all the articles of this blog, for the theory explanations about Rikka we refer to the Shoka/Seika which has kept the basic structure of Rikka but it is much more simple and therefore easier to explain.

In order to understand the reason for the symbolic spatial arrangement of the plants in ikebana, it is necessary to understand the graphic representation of the Taijitu, its orientation and its symbolic relationship with the cardinal points of the compass.

Construction of the Taijitu 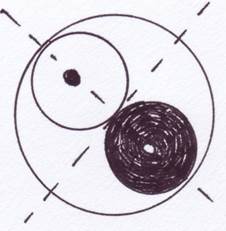 They are characterised by ‘opposite’ colours :

– yang colours, such as white or red (the colours of light or of the sun) in one of the two circles. The other is coloured with

– yin colours, “opposite” to those used in the other circle, such as black or blue.

So the white circle represents the yang side and the black circle the yin side. 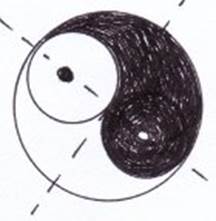 To emphasise the fact that the two energies yang and yin are always in motion and are continually transforming one into the other, one extends the white and the black (indifferently to one or the other part of the sides that surround the two circles), but the yang part will remain the half of the great circle in which the white circle is inserted (completely white quadrant + quadrant with white semicircle and black “tail”) and not the one with the greater surface of white; the same is true for the yin part. 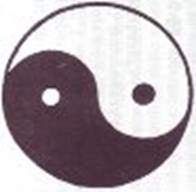 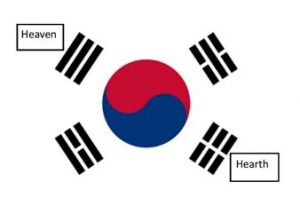 The correct placement of the taijitu, in order to understand the symbolism of ikebana and its relationship to the cardinal points, can be seen in the South Korean flag above: the important thing is the position of the coloured circle (and not its tail) red-yang towards the sky and blue-yin towards the earth. 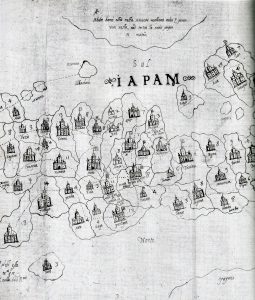 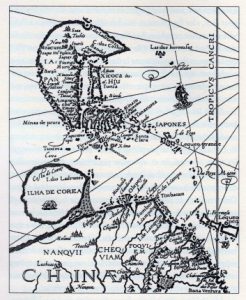 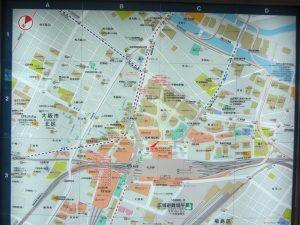 The south at the top and the north at the bottom is also found today on the underground maps of Japanese cities, as in this example of Osaka city. m

We also find the south at the top in this medieval European cartography, see Tabula Rogeriana, the world map drawn by Brother Mauro and others Above is above mentioned world map dated 1440 – kept in Venice. 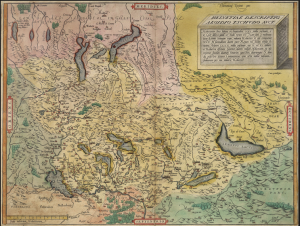 Map dated 1584 of the region of present-day Switzerland in which the lakes of Como (Larius), Lugano and Locarno (Verbanus) are at the top marked MERIDIES and German-speaking Switzerland is drawn to the north, at the bottom marked SEPTENTRIO below Basel, Switzerland’s northernmost city, and the Rhine River. 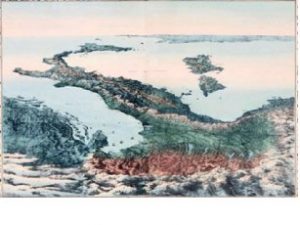 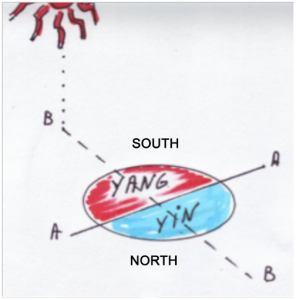 Looking at the Taijitu we see that the southern quadrant, at the top, is yang, associated with fire, summer, the colour red, the phoenix (see 9th article).

If the south quadrant is yang, the north quadrant at the bottom is yin and is also associated with the “opposites” listed in the yang/south quadrant, which are: cold, water, winter, the colour black, the turtle.

Following the same logic we make the other combinations: the sun is born in the East and its light and heat increase, grow: the increase/growth is therefore a yang characteristic so this quadrant is considered yang, while the sun sets in the West, it weakens and the weakening is a yin characteristic so this quadrant is considered yin: in both quadrants we have associations with the elements, seasons, colours, protective animals and more.

We then have the circle of the Taijitu divided in two parts: yang (south and east quadrants) and yin (north and west quadrants) separated by a line A-A, inclined at 45° in relation to the observer and perpendicular to the line B-B, which unites the point of maximum-yang, where the sun is symbolically placed, with the point of maximum-yin. This line is also inclined at 45° in relation to the viewer.

Please also note that the two main elements shu/fuku are on the yang side, in red in the diagram, while kyaku is on the yin side, in blue: consequently the plant material used for shu and fuku must be yang compared to the one used for kyaku. This is the reason why, still today in the Ohara school, in the traditional styles, the shu-fuku group is composed of Ki-wood material while the kyaku group is composed of Kusa-“grass” material,( see 2nd article “concept of strong and weak” ) It is interesting to know that also the space of Sen no Rikyu’s wabicha is divided into yang and yin sides like ikebana. In this diagram of Shoka, seen both from the front and from above, the symbolic sky-earth direction assumed by the three main elements in alignment is clearly visible:

the highest central element (the Ohara school shu): it starts from the centre, goes towards the sun and comes back towards the centre so that its tip stays on the orthogonal of the starting point

It is also evident that shu and fuku are on the yang side of the composition while kyaku is on its yin side. 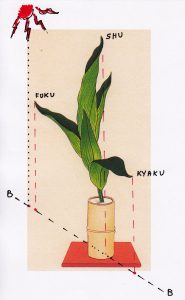 You can see above the drawing of a Shoka Ikenobo made of only Aspidistra leaves: as in the scheme described above, shu and fuku are directed backwards to the left (towards the symbolic position of the sun at the maximum yang point of the taiji on our left) while kyaku is directed towards our right, forward, in the symbolic direction towards the earth at the maximum-yin point.

Along the BB line only the three main elements are aligned while their auxiliaries all assume different directions both backwards as well as in all other directions.

Another important rule (see art. 24) originating from Shinto is that:

shu looks towards the sun while all the other plants look towards shu.

In the drawing with Aspidistra it is clearly visible that the positive/yang/dark side of the leaves follows the above-mentioned rule and we see the composition, as a whole, from the north, “from behind”, as it faces the sun, positioned for the rikka and shoka of the Ikenobo School on the other side of the vase from us looking at it. 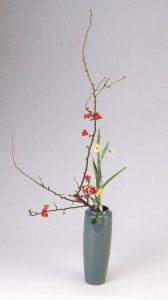 When only one plant species is used, as in the case with the aspidistra, it cannot be emphasised that the shu-fuku group, on the yang side, must be composed of “stronger” plants than the plants of the kyaku group, on the yin side of the composition.

During  the Tokugawa period, Neo-Confucianism was preferred to Taoism, for which symbolically the Heaven is above and the position of the sun was changed from “behind” to ” the front” of the composition on the same side as the viewer of the ikebana and consequently  also the direction of the three main elements was changed: the composition was called Seika.

The only school that maintained the Taoist symbolism and did not change the directions of the three main elements was the Ikenobo, who called the composition Shoka.

The three main elements of the composition symbolically connecting heaven to earth remained in  Seika but was expressed in a different way. Changing from Taoist symbolism (yang-yin) to the symbolism of neo-Confucianism (preferred by the Tokugawa to Taoism) the position  of the elements  therefore changed