The origin of ikebana according to tradition was written in the second half of the 1700s by the Ikenobō, and relates the birth of ikebana with historical figures who really lived but whose involvement with ikebana is historically impossible. 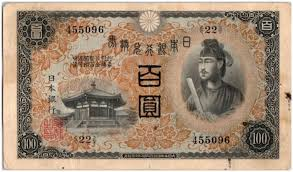 Japanese banknotes showing both Shotoku Taishi and the Rokkakudō 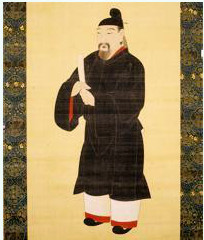 At the head of two embassies to China in 607 and 608 was ONO NO IMOKO, nephew of the emperor Bidatsu (538-585) and cousin of Taishi. His return from the second embassy is historically documented but this is the last historical information about him: from his return from China onwards, he is no longer mentioned in any source

The Japanese imperial message, brought by Imoko to the Chinese Emperor Yang in the first embassy, started with:

This message probably annoyed the latter because it equate the two emperors, while the Chinese imperial court considered the Japanese to be an insignificant and barbaric people.

When Ono no Imoko returned from the second embassy, Taishi was dead and at this point tradition states: Ono no Imoko took his vows and retired to Rokkakudō, becoming its abbot and taking the name of the Buddhist monk SENMU.

It is said that he began to create flower offerings to the altar of Buddha the way he had learned to do in China.Tradition states that he lived in a hut adjacent to the Rokkakudō located by the pond where Shotoku Taishi had cooled off. Hence the origin of the name Ike no bō (=hut by the pond). 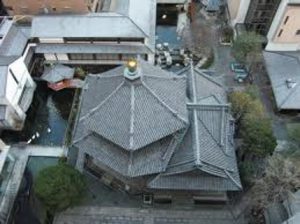 According to tradition, the abbots who followed him at the head of the Rokkakudō continued to occupy themselves and develop this art, which in the Edo period was called ikebana.

From the second abbot onwards, as monks, they assumed names that all began with SEN, a custom that has survived to this day.

Historically, the name (Senkei or Senei) Ikenobō first appears in a diary of the Kyoto Buddhist monk, Hekizan Nichiroku, dated 25 February 1462, in which it is said that many people saw compositions in a golden vase performed by the monk Senei Ikenobō.

From the 608, the historical date on which Ono no Imoko returned from the second embassy (and retired, according to legend, to Rokkakudō, taking the name Senmu) until 1462, the year when the name ikenobō first appeared in the diaries, this name has never been mentioned in any other historical source that has come down to us.

With the aim of increasing or strengthening the prestige and legitimacy of the school, the Ikenobō, as well as associating the birth of their name with Shotoku Taishi, associated Senkei Ikenobō with the Ashikaga shoguns saying that he was in the service of Yoshimasa, the eighth shogun, and that in 1479 the latter named him: “Dai Nippon Kado no Iemoto” (he who originated ikebana).

Thus demonstrating Yoshimasa’s alleged preference for the Tatebana created by Senkei over those created by the dōbōshū of the Ji sect.

The dōbōshu were secular-monks in his employ, who first created the Tatebana; the association of Senkei Ikenobo with the shogun Yoshimasa is considered by historians to be untrue.

Although texts written on Tatebana appear as early as the 14th century (e.g. Sasaki Dōyo 1306-1373) and in various journals there is mention of “arranging/putting upright” (TATERU ) flowers, as for example in a record dated 20 April 1476.  In this it is said that Yoshimasa, on the occasion of his visit to the Imperial Palace, asked his dōbōshū Ryūami to ” put up rights” (TATERU) of peonies. The same action is also described on other pages with other flowers.

Tradition links the birth of Ikebana only to the Ikenobō School, but this tradition was written by the Ikenobō themselves in the Edo period at the request of the Tokugawa shoguns.

The dōbōshū see article 33 , the first “creators” and codifiers of the rules of the Tatebana, disappeared with the fall of the Ashikaga and the Ikenobō, now the only ones dealing with this art, began the hegemony in the field of ikebana that would last until the middle of the Edo period, when the other schools were born, all derived from the Ikenobō school.