Please note: among the many homophone kanji pronounced KA one is:

therefore Ka-dō, written in rōmaji and out of context, can mean -the way of “flowers” – or -the way of poet

When the ikebanist has learned the basic rules of ikebana and is no longer worried about “making mistakes” while composing.

By doing a conscious choice he can use this art as a “way of emancipation” and consider what he does – composing an ikebana – from the point of view of Ka-dō, whose ideal aim is the attainment of a particular state of mind, of control of one’s body, of a discipline of behavior. All these characteristics, exercised and developed by practicing ikebana as Ka-dō, will enter into one’s daily life and will be put into practice also in other situations of our life.

In everyday life, we wear several masks and armours.

In learning to create an ikebana, various facets of our character emerge while performing the composition: shyness, aggressiveness, anxiety about not succeeding, fear of making mistakes, belief in having “good taste”, difficulty in accepting the teacher’s corrections, comparison with the works created by other pupils, eagerness to finish, disorder around the composition, etc.

Being aware of these aspects of our character is the first step on the way to change, to the Buddhist enlightenment (satori).

For a western-minded ikebanist, practicing ikebana in the spirit of Ka-dō is an attempt to achieve inner calm and learn to concentrate.

As well as improving one’s personal ethics, so that even without achieving “enlightenment” one can improve one’s quality of life.

The “ideal” mental and physical attitude of the ikebanist who follows Ka-dō is the following:

– Put yourself in a state of inner peace; calm the turmoil by concentrating on what you are doing.

Staying focused and considering the time and the place in which you perform an arrangement, at school as well as at home, not to “competitively produce a beautiful ikebana” but to dedicate some pleasurable time to yourself.

To connect with the plants we use, considering them not as an object of possess, to be exploited, or as a tool to show off our “composing skills”, but as living plants that deserve all our respect.

– Consider all the single plants and elements, which must be in harmony with each other.

For example, do not be attracted by a single branch that we consider “beautiful” and try forcefully to adapt the rest of the composition to that branch, despite technical difficulties, but know how to sacrifice the exclusivity of a branch by replacing it with another in favour of the outcome of the entire composition.

Those who follow the Way live in harmony with the rest of the world and do not pretend to be the center to which everything and everyone must adapt.

– One of the first steps to take along the Ka-dō is to free oneself from constraints such as “I like this” or “I don’t like that”, occasionally overheard among those who follow the first ikebana lessons, both in relation to the plants used and to the compositions of the other students.

-Focus on what you are doing, forgetting to think about past or future daily problems. Important is the –here and now-.

Important is what I do here, in this place and not what I have done or will do in other places, at home, at work, at the dentist’s, in the kitchen, in the car.

Important is the now, this moment and not what I did last time – for example a composition that did not satisfy me and the dissatisfaction, linked to its technical difficulties, that I bring with me – or what I will do next time – a wonderful composition that everyone will admire. Keeping the mind at the -here and now- is one of the steps of the Way.

– Those who do not follow the Way are focused only on the composition and forget to treat plants, objects and people, as they would like to be treated. 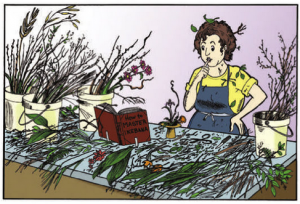 We usually give a great deal of consideration to the plants, or part of them, that are included in the composition compared to those we discard, considered bulky, troublesome, to be thrown away as soon as possible; in our eyes those used in the composition will be the reason for the praises we will receive while those discarded do not contribute to highlight our skills as ikebanists.

Who is following the Way consider both the plants that become part of the composition and those that do not in the same way.

He gives the same attention and care in not letting them fall down at random, in not stepping on them, in picking them up if they have fallen on the ground using broom and dustpan.

The plants in the composition will also end up being thrown away, but those were used to strengthen our Ego while the discarded ones were not used for this purpose and therefore are unfairly considered “useless” and treated accordingly.

The things we use deserve the same treatment as the plants, so those who follow the Way will be careful in the use of the various tools, taking care not to make noise by putting the scissors on the table – in Japan they use a cloth to put the scissors on so as to attenuate the noise -.

The table must remain clean around the composition as well as the floor, if their use is necessary, the broom and the dustpan must be used consciously.

Some novice ikebanists have a tendency to critically evaluate the compositions of their colleagues or, when the teacher is correcting the composition, they list their good motives for why that plant, which the teacher has corrected, was put that way. Explaining the good reasons on the student’s part does not change the reasons for the correction.

Gusty Herrigel in her book – Zen and the Art of Arranging Flowers – in her second lesson after the Master has removed the flowers from the vase and remade her composition, writes: “Why, I wondered, can’t the Master take into account the psychology of the European, who does not admit a priori that he or she is incapable of succeeding?”

Those who follow the Way are more merciful with the other students, refrain from making comments and do not perceive the correction as a “personal critique” but as a help offered to improve their technique and their understanding of ikebana.

He listens in silence to the teacher’s correction and explanation and will make good use of it in the future.

The teachings of Zen, and consequently those of Ka-dō, are transmitted through demonstration and very little through words.

Remember the “silent flower sermon”, considered the beginning of the Zen practice that Buddha gave on Vulture Peak: when asked by the followers to give a sermon, Buddha responded with a silent act, showing only a flower.

Patience, humility, peacefulness, respect, and harmony are characteristics of those who follow the Way.

– Although it is difficult to maintain silence during the lessons, those who follow the Way try to do so; silence allows their own concentration and that of the people around us. Silence shows respect for oneself, for the teacher and for the other people present, and helps to emphasize the ” sacrality ” of what one is doing.

– Those who follow the Way are aware of how they use their bodies: they economize their gestures by leaving out the superfluous. The acts we perform in choosing the vegetables, measuring the appropriate length and inclination, manipulating them, taking and placing the scissors without noise, removing the superfluous, inserting them in the container must be precise. These movements are comparable to the katas performed in Martial Arts: consciously practicing to continuously repeat the specific movements makes them spontaneous and automatically executed.

These gestures, with the ideal characteristics described, are the result of a long careful observation of the plant, of an instinct educated to harmony but above all of the inner strength freed from the Ego.

If we are concentrated on what we are, doing nothing should fall on the ground; if this happens, for the ikebanist who follows the Way, cleaning has the same importance as the creative act of composing ikebana.

– The “dismantling” of the finished composition is an action equivalent to the destruction of a Mandala that reminds the ikebanist of the impermanence and transience of things and people: it is important to learn to “let go” without regrets what in any way cannot be held back.

It should be emphasized that this character-forming discipline, this path to personal fulfillment and liberation based on the practice of Zen, has nothing to do with religion as understood by a person of Christian faith.

Ka-dō can be followed regardless of the religion professed by the ikebanist, since the values it promulgates – concentration, economy of gestures, silence, harmony, respect, serenity, patience, humility, consideration of others – although shared by religions, are not religious in themselves.