Tradition attributes the creation of the Nageire to Sen no Rikyū (employed by Hideyoshi as a Tea Master from 1585 to 1591) and relates that, during a break in a military campaign, the kampaku ordered Rikyū to create an ikebana.

Rikyū, not having the material needed, used his dagger to cut iris flowers and leaves, tied them to the handle of the dagger and threw the whole thing into a small tub: the blade stuck at the bottom of the container, keeping the irises straight.

Hideyoshi congratulated him, saying:   “What a beautiful nage-ire (= thrown in)”.

Historically, Nageire is mentioned about 140 years earlier than tradition has it, since the Sendensho (the oldest manuscript on ikebana that has come down to us, dated 1445) already uses this term for free compositions, not codified like the Tatebana.

Tipes of Nageire  from  Utamaro prints, 1793

So, by using the term NAGEIRE, we are referring to a more free form, compared to Tatebana, of composing.  Here plants with different characteristics from the plants used for Tatebana are “thrown in” in a high or lower vase

It is interesting to know that the first Ohara Moribana were called -Suiban Nageire- or Nageire (free composition) in a low vase (suiban), a name probably chosen to highlight the detachment and freer use of plants of the Ohara school, compared to the other schools still bound to the tradition of the time. 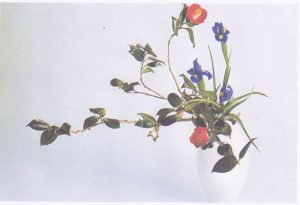 So the word Heika refers to the kind of (high) vase used.

So the word Nageire refers to the way of composing (free in the past, now codified).

Considering that the first name given to the Moribana (suiban Nageire) and the name Nageire used for high vase compositions, the Moribana and Heika Ohara should give the impression of naturalism, in spite of the obligation to follow the rules of composition.