The Japanese monarchy is the oldest institution of the globe. It is perpetuated almost in its totality by male hereditary line with the exception of a few cases in which became Tenno some daughters or wives of emperors or women relatives of the Imperial Family, and always only with the aim of preserving the throne in the family, never by free choice. The Imperial Family has no surname and all the Tenno are known only by their posthumous Buddhist name, given to them after their death.

The first 42 Emperors of which tradition tells us resided in as many seats about the size of a village; since Shintoism considers impure both blood and death, at the Emperor’s death the village, having become impure, was abandoned.

There were 8 female Tenno:

Of the 125 TENNO in official history, eight were women and two of them were two times with different names; therefore, official Japan had Empresses ten times.

In Japanese mythology, there are mentions of queen-shamans who held power.

For example it was JINGO who led the first invasion of Korea, she was pregnant and to allow her son (future emperor OJIN) to be born in Japan, the pregnancy lasted 14 months and it is said that he “led” his mother from the womb in the battles, for this reason, at his death, OJIN was identified with HACHIMAN, god of war. 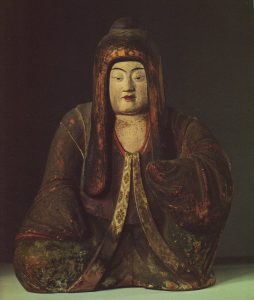 Temple of Hachiman in Nara

The term TENNO ( 天皇 TEN=sky, 0=sovereign ) was first used by Shotoku Taishi in the missive for the Chinese Emperor brought by Ono no Imoko (to whom tradition associates the birth of ikebana through the presumed beginning of the Ikenobo dynasty see art. 12th) in reference to the 1st Empress Suiko (33rd Tenno of the official list, who reigned from 593 to 628), under whose reign began the diplomatic relations with China.

In the political Chinese concept, the Emperor was a Heavenly Mandate, meaning that his task was to ensure harmony between celestial forces, natural forces and human forces; he could carry out these functions only if endowed with virtues.

The Imperial Mandate was entrusted by Heaven and could be withdrawn from Heaven (and pass to another dynasty) if it proved not to possess these virtues. To avoid a change of the Imperial Family (as happened in China) the Japanese nobles claimed that the emperor was not by heavenly mandate but because he was a direct descendant of the kami Amaterasu, Goddess of the sun.

1st Tenno woman: in 592 UMAKO, head of the SOGA clan, had Emperor SUJIN assassinated and appointed his niece SUIKO, Sujin’s widow, to the throne; Another of his nephews, SHOTOKU TAISHI (= Holy Prince), was appointed Regent. He was a cultured and far-sighted man who favoured the introduction of Buddhism at Court and whom tradition associates with the birth of ikebana because, again according to tradition, Taishi built the Rokkakudo, the temple to which Ono no Imoko retired as the first Ikenobo abbot.

The tradition associates the “birth of ikebana” with these true historical figures, but their role in the making of ikebana has been supported by tales created by the Ikenobo almost a thousand years later in order to reconstruct an important past and give themselves legitimacy, when they became famous with Senkei Ikenobo, the first Ikenobo name that was mentioned for the first time in 1462 as the creator of a Tatebana in a gold vase. (See art. 13, the birth of ikebana according to historical sources)

2nd Tenno woman:  on the death of SUIKO, Emperor JOMEI ascended the throne, but on his death in 641, again due to political problems, his wife Princess TAKARA ascended the throne as the 35th TENNO under the name of KOGYOKU; she abdicated after three years in favour of her son Prince NAKA who, in order to be able to really rule behind the scenes, preferred to refuse the title in favour of KOTOKU, Kogyoku’s brother, who became the 36th Emperor in the official list.

The latter died nine years later and, for the second time, Kogyoku was raised as the 37th Tenno and took the name of SAIMEI, remaining Tenno until her death in 661.

3rd Tenno woman: in 690, after the death of Emperor TEMMU, became the 41st Tenno his wife with the name JITO. She was also known as a poetess, with her waka included in Manyoshu. She retired in 697 to allow her son MOMMU to assume the throne until 707 when he died. Being his son only 6 years old, his wife became Tenno with the name of GEMMEI.

GEMMEI  was the 4th Tenno woman and the 43rd Tenno. During her reign,  that lasted 8 years, the capital was moved to NARA and the KOGIKI (= history of ancient things), the first book on Shinto mythology and on the history ( mythicized) of the aristocracy of the Yamato, was completed. She abdicated in 715 in favour of her daughter Princess HIDAKA who became:

The 5th Tenno woman, with the name of  GENSHO. She was the  44th Tenno on the official list  and reigned from 715 to 724. During her reign was written the NIHON SHOKI (= chronicles of Japan) which, like the KOGIKI, repeats (with variations) and extends the ( mythicized) chronology of the Yamato bloodline.

KOKEN was the 6th Tenno woman, 46th in the official list, from 749 to 758 . She abdicated in favour of one of her sons when she became seriously ill; during her illness she was treated by a Buddhist monk – Dokyo – who healed her; she fell in love with the monk and engaged him as a counsellor.

Healed, she succeeded in ascending to the throne a second time in 764, taking the name SHOTOKU, 48th Tenno, and installed her lover-monk (who acted as if he were the Emperor) in the Palace, appointing him Head of Ministers. Fortunately for the Court she died in 770 and Dokyo was immediately removed. Because of the behaviour of the latter female Tenno, no other female Tenno was appointed for over 800 years. In fact, in the Heian, Kamakura, Muromachi and Momoyama periods there were no Empresses.

In 1629, the 7th Tenno woman was appointed, a little girl, who took the name MEISHO, 109th on the official list.

The second Shogun Tokugawa HIDETADA had given his daughter Kazuko in marriage to Emperor Gomizu-noo as a gesture of reconciliation between the increasingly powerful Shogunate and the decadent (penniless and maintained by the shoguns) Imperial institutions.

The Emperor, in order to collect some money, used to sell some privileges to the monks such as the permission to wear clothes of certain colours reserved to the nobility. The Shogun forbade this practice to the Emperor and he abdicated in favour of his daughter (and niece of the Shogun) Princess Okiko, only 6 years old, to put him in an embarrassing situation.  The Shogun, consequently, ended up having to submit (only in theory, but appearances were very important) to a child Empress and, moreover, his niece.  She was Tenno (under the regency of a Fujiwara) for 14 years, then abdicated in favour of her half-brother and became a nun.

The 8th and last Tenno woman, 117th on the official list, was GO-SAKURAMACHI. She ascended the throne at the age of 22 and held this position from 1762 to 1771.

She was the sister of Emperor Momozono who died at the age of 22 leaving behind a son of only four years. She held the throne until her nephew turned twelve and was appointed Tenno. Little is known about her, only that she was an excellent calligrapher.

Since then there have been no more Tenno women and in the 19th century the Imperial Household established that in the Imperial Family only the eldest male child could assume the role of Tenno.